German Succession Law does not know the concept of a “Personal Representative”. Instead, German inheritance law applies the principle of direct accession (more on this here). That is all very nice and efficient if there is only a sole heir. Or if, in case there are several heirs, they are reasonable and on good speaking terms. If, however, which is not uncommon, the co-heirs do not like each other or if they disagree on who should get what, then the German concept of the Erbengemeinschaft, “Community of Heirs” (section 2032 German Civil Code), creates a mess for everyone involved.

Because all co-heirs (Miterben) must act jointly and are forced to agree about everything by unanimous vote. In other words: The German Grant of Probate (Certificate of Inheritance) lists all co-heirs by name. Consequently, this means that every document required for the administration (or rather dissolution) of the German estate, i.e. each letter of instruction to a bank or insurance company, each letter to the German Land Registry or an estate agent etc, must be signed by each and every co-heir.

Even a co-heir who has only a small share in the estate (let’s say 1/8th or 1/16th), can block and sabotage the administration of the estate by constantly voting against the majority. In practice, this means that houses and stock can’t be sold, bank accounts can’t be closed, monies can’t be distributed until all (!) co-heirs unanimously agree and sign the necessary documents or until a German Court of Law has decided on the matter. Thus, contentious probate and disputes among co-heirs are rather common in Germany, because German intestacy rules often create such an Erbengemeinschaft (community of heirs) consisting of people who cannot stand or do not trust each other, especially in patchwork constellations. If, for example, there is an estranged child from a previous marriage of the deceased which the family has not spoken to in decades (or ever), but who now has the same rights as the surviving spouse and the children from the second marriage.

How to avoid the creation of a Community of Heirs

An Erbengemeinschaft is therefore extremely dangerous and often triggers expensive disputes. Thus, most German succession lawyers  recommend avoiding this and instead, to create such a community of heirs by setting up a Will which:

(ii) appoints a Testamentsvollstrecker (Executor) who can and will take charge if the co-heirs cannot agree amicably. 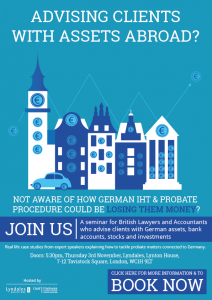