Cause of Death is Confidential Information in Germany 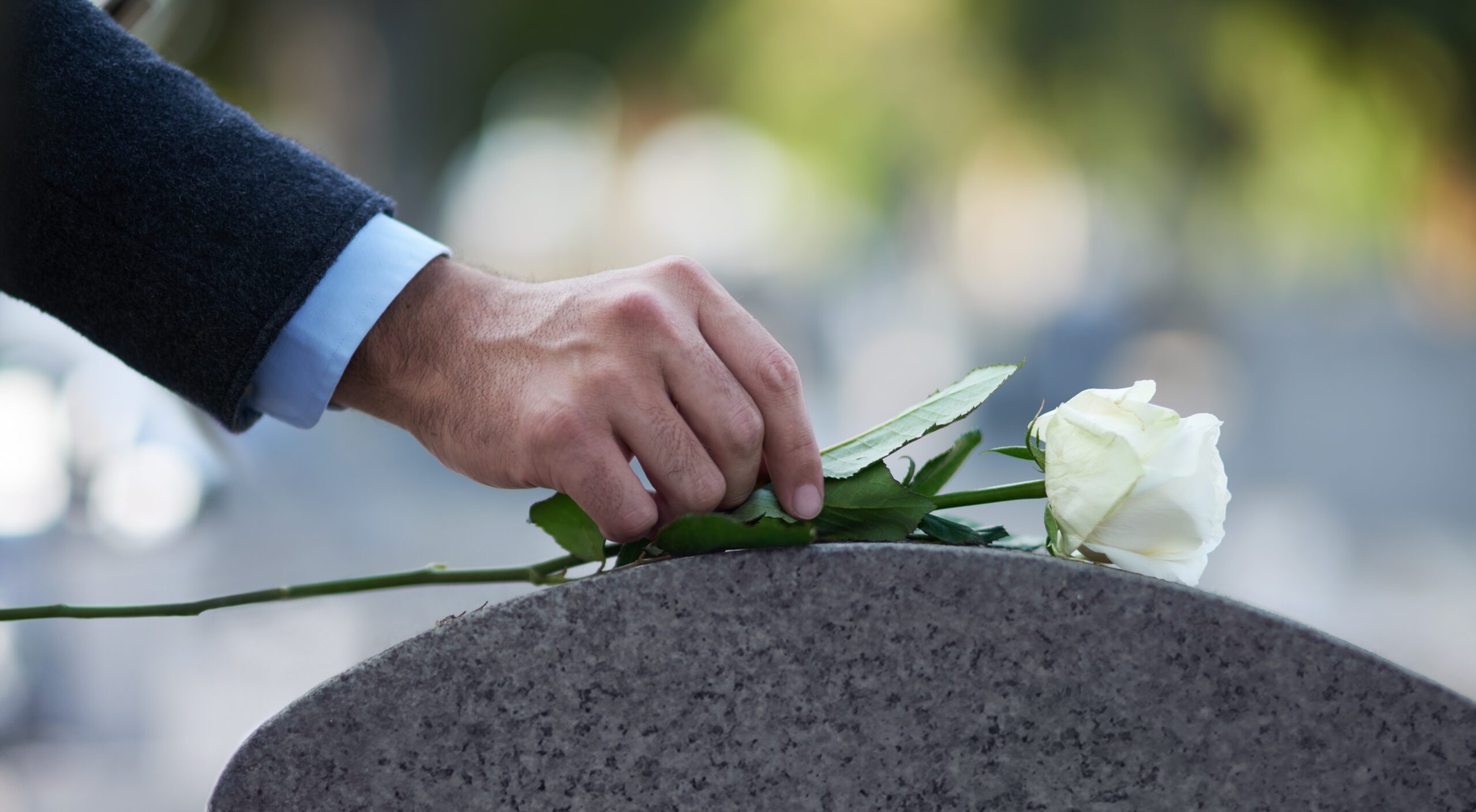 As so many other things in Germany (e.g. land registry information), the question of how and from what a person has died, is considered strictly confidential and will not be disclosed to the public. Not even to the next of kin or the spouse! Therefore, in contrast to the UK and most states in the U.S., a German death certificate (Sterbeurkunde, see picture) does NOT state the cause of death. 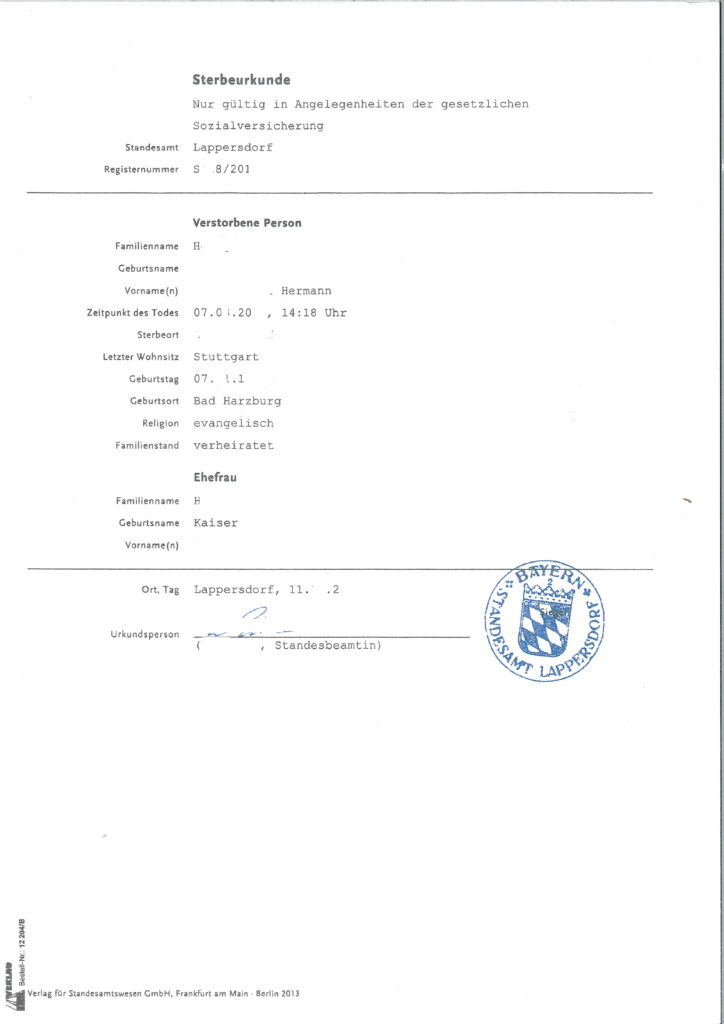 As you can see, the German death certificate does not mention the cause of death at all, not even in a generic manner. It only specifies the date and time of death, as well as the spouse. Surprisingly, the decedent’s religion is not considered confidential information. German confidentiality rules are not entirely logical and consistent.

Please also note that at the top, right below the headline “Sterbeurkunde”, the German death certificate often specifies for which purpose the original copy of the death certificate was issued. In the above example, it states “for social security purposes only”.

German death certificate does not state the cause of death – What now?

Unless the deceased, while still alive, has released their physician from their medical confidentiality obligations towards certain persons, nobody will get access to the medical files until such person can show the German certificate of inheritance (Erbschein).

This creates a problem if someone who holds a life insurance dies in Germany and the relatives or the executors do not need to apply for such German grant (Erbschein), for example because there are no German assets.

Insurers, however, usually insist on being informed about whether the insured person may have committed suicide or may have been the victim of an injury caused by a third party. In the first scenario, the insurer would not have to pay at all, in the second scenario, they may be entitled to claim reimbursement from the violator.

In that situation, there are three options to try to obtain the cause of death information without having to go through the costly German probate proceeding:

(1) Insurance companies often have clauses in their contracts according to which the insured person authorises the insurer to enquire directly with the medical practitioners or hospitals (release from medical confidentiality).

(3) The next of kin or the spouse can also write to the local persons register (Standesamt) and ask for a copy of the “non-confidential part of the Todesbescheinigung (or Totenschein), see the example below. This document is NOT the same as the certificate of death (Sterbeurkunde). Under German law, such a certificate must be issued by the practitioner who confirms the death of a person and must then be sent to the local Standesamt. This Todesbescheinigung has a non-confidential section (page 1) and a confidential section which gives more medical details. So, while the non-confidential section does not specify the exact cause of death, it does specify whether the decedent died of a natural cause or whether there were unusual circumstances (suicide, homicide, accident, malpractice etc.), see example below. In my experience, the chances of the Standesamt releasing this to the next of kin or a spouse are higher if the application is made through a German lawyer.

Here is an example of a real German Todesbescheinigung (non-confidential section) issued by the University Hospital Bonn, which was the hospital where the deceased had passed away in this specific case. Under German law, the Todesbescheinigung must be issued by the practitioner who diagnosed the death of a person and be sent to the local Standesamt (here the city of Bonn). 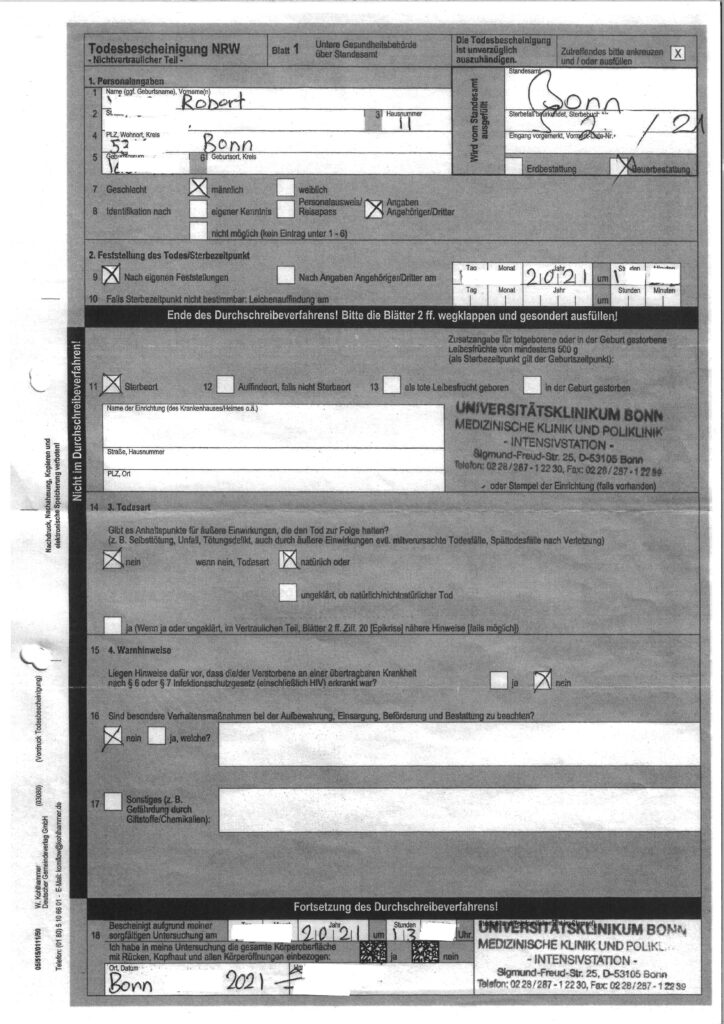 The relevant section is line #3:

(x) of a natural cause

(  ) unclear, whether natural or unnatural cause

In many cases, the insurer is satisfied with this information. If not, there is no other alternative than to apply for German probate details (see here). The German authorities and the medical practitioners will then disclose the full information and medical records to the person(s) named in the German grant. However, even then there are exceptions with regard to extremely personal medical records like the patient files of a psychiatrist. Those may in many cases not even be disclosed to the heirs.